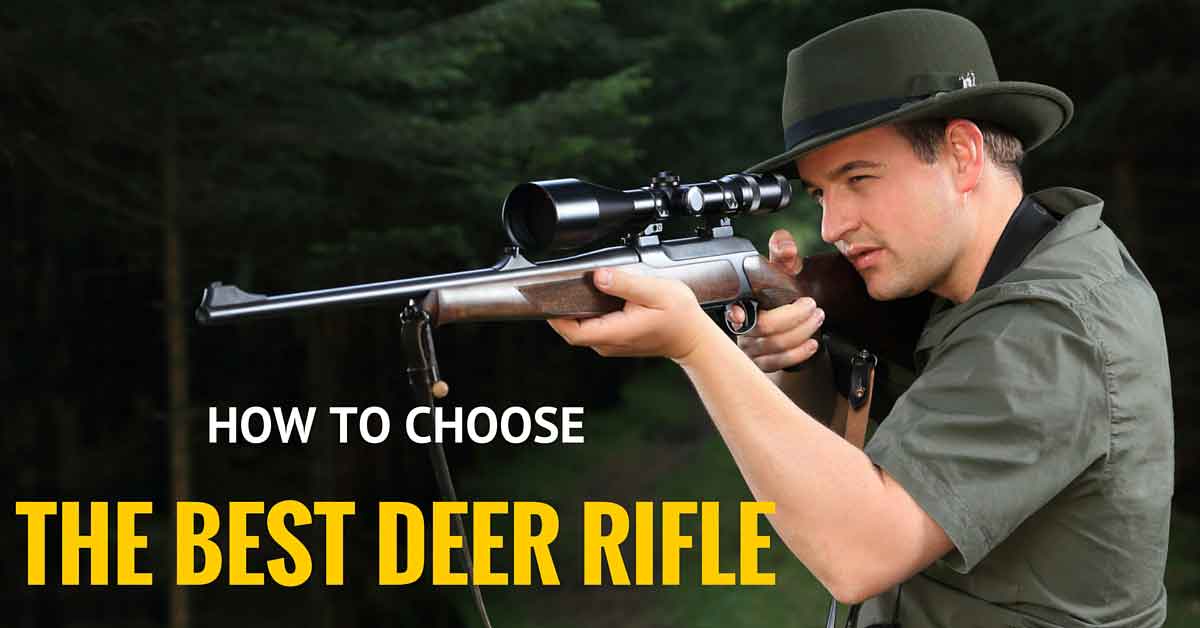 How to Choose the Best Deer Rifle

For many of you out there, simply broaching the subject of ‘hunting’ evokes fond memories of going on a safari with your now wizened uncle or grandfather. Seasoned hunters never get tired of proudly reiterating to avid listeners about the adrenaline rush they experienced every time they aimed and pulled the trigger on a whitetail or mule deer. If you’re seriously considering going on a hunting trip in the upcoming winter, the first and foremost that you’d need to carry is a deer hunting firearm or rifle.

In case you’re an adult starting out on large game hunting, it is obvious that you’d be looking to use a deer rifle for the first time. And that’d entail zeroing on a firearm that you’d be able to handle as a first-timer. So, how to choose the best deer rifle? To be specific, would you settle for a semi-automatic loader or a pump or a bolt?

What’d be the caliber and length of the rifle’s barrel? What sort of terrain will you be choosing for your safaris? Will you be shooting from close range or take a long shot? When it comes to selecting a rifle that you’ll feel comfortable using, you’ll have to factor in not only the make or type but other aspects including weight of the weapon and bullet, shooting range, accuracy, and finish.

Aspects to Consider While Choosing Your Ideal Deer Rifle

It doesn’t need to be emphasized that if the hunter is a young woman, she’ll fall flat on her face is she tries a high-caliber hefty rifle at first. With a .30 or .32, she’ll be heading for disaster and the outcome will be shots that are wide off the target, not to mention the staggering impact of recoils. Ultimately, the woman will come to dread hunting and only because the rifle was inappropriate.

The idea is to have optimum comfort and stability while handling the gun and that can only be offered by a low-caliber light firearm. You’ve to bear in mind that you first need to get acquainted with using the shooter. Once you pick up the essential skills, you’d be able to graduate to a heavier and high-caliber rifle. As for the woman learning to use the deer rifle, a firearm with .22 bore would be apt.

How to Choose Best Deer Rifle Your Firearm Type

You need to have a firearm that you’d find not only easy to lug across distances but also comfy to load, take aim and fire quickly. In this context, brush guns would suit you perfectly as these are comparatively lightweight and have shorter barrels with midrange-to-short bores. And there are categories of brush guns to choose from including pumps, semi-automatics, and levers.

​All these types come in equally handy when you need to fire shots in quick succession. However, what matters is the speed with which you can aim and shoot the first bullet. If you’re serious about perfecting that first shot, go for a bolt action gun. The bolt action really doesn’t have an equal when it comes to mastering accuracy both for short and long ranges.

The third aspect in choosing the best deer rifle is the length of the barrel that’d be apposite for someone who is beginning to pick up the nitty-gritty of large-game hunting. With regards to the bore’s length, a rifle having a shorter barrel will serve the purpose when you need to fire accurately and instantly at a fleeting elk or moose. Since the barrel of a firearm makes up the bulk of its weight, a short barrel translates into a lightweight rifle.

​The downsides of using a short-barreled shooter are that stability and velocity takes a beating. The very lightness of the barrel that acts as an advantage when practicing to shoot accurately can weigh you down when you have to steady the crosshairs within seconds especially when a game comes in sight. On the other hand, a long-barreled gun with a .26﻿﻿ ﻿﻿bore for instance will offer a greater velocity but holding the shooter steady will be a burden.

The solution lies in selecting a rifle with a short barrel that’ll help you in striking a fine balance between steadiness and accuracy as you’ll be position the gun stably on a perch or slide it through the branches of a tree.

The caliber of the deer rifle that’d be ideal for you will invariably depend upon whether you’re planning to practice short-range or long-range shooting. If shooting from close quarters is what excites you, then a low-caliber gun is what you should be gunning for. Figuratively speaking, if you’re intending to take aim from say a distance of 30 to 50 yards in heavily forested surroundings with thick cover, then the ideal caliber dimension is .35 or 30/30.

How to Choose Best Deer Rifle the Ideal Caliber

​Look for this rating of caliber in a brush-gun (either a lever or a semi-automatic). You’ll have it easier moving through dense bushes deep inside a jungle when you carry a .30 Winchester or Browning rifle. And most importantly, you’ll be able to get into a favorable position and take aim fairly quickly and with surreptitiousness.

Conversely, if you’re game for hunting over longer ranges, rifles with larger calibers will come to your aid. So, when a chital or musk deer is grazing at a distance of about 200 yards from where you’re positioned, a Springfield rifle with a .30-06 is what you should be holding. Since game hunting in long-ranges is more suitable when the terrain is more or less open less obstructed by thickets or bushes, it has been observed that using.30-06 bolt action rifles or guns serve the purpose allowing you to take a potshot at your target and not miss the same at least six times out of ten.

The Springfield 1903 model is still heavily in use even after more than a century. However, any other recognized brand of .30-06 rifle should do the job and with equal efficiency. You’ll even get rifles with magazines of 7mm that can be used accurately for longer ranges or distances (up to 600-700 yards for instance). Nevertheless, you’ll first need to develop the flair of firing accurately over short and midranges before you can handle a Springfield, Remington or Winchester having a higher-caliber.

If the areas you prefer to hunt have a string of hunting restrictions then you need to opt for a firearm the using of which does not contravene the limitations imposed. For instance, the use of light and heavy-duty rifles might be prohibited in your preferred hunting areas. In such a scenario, you can choose to use a shotgun especially one with a rifled or slug barrel. A slug-barreled shotgun can be used in place of a rifle or a brush gun for shooting deer from ranges varying from 100-250 yards.​

Weight of the firearm​

​The heft or weight of the firearm does make a substantial difference when it comes to large game hunting. After all you’d want your weapon to be handy and flexible while carrying it as well as during taking aim and firing. The recent brands of firearms tend to be lighter, immune to corrosion, and resistant to wear-and-tear as these are constructed out of composite raw materials. Additionally, you can always choose to be traditional by going for a rifle chiseled out of steel and wood.

​If you’re looking to own a firearm for deer hunting that you intend to use long-term, then it all boils down to selecting the same (based on the aforementioned parameters) depending upon your tastes and preferences. In this regard, you can seek the opinion of some of your near and dear ones who’re experienced hunters. Apart from that, the gun shop owner in your neighborhood will surely be able to offer you some useful tips.

What There Is To Know About The Best Expandable Broadheads?